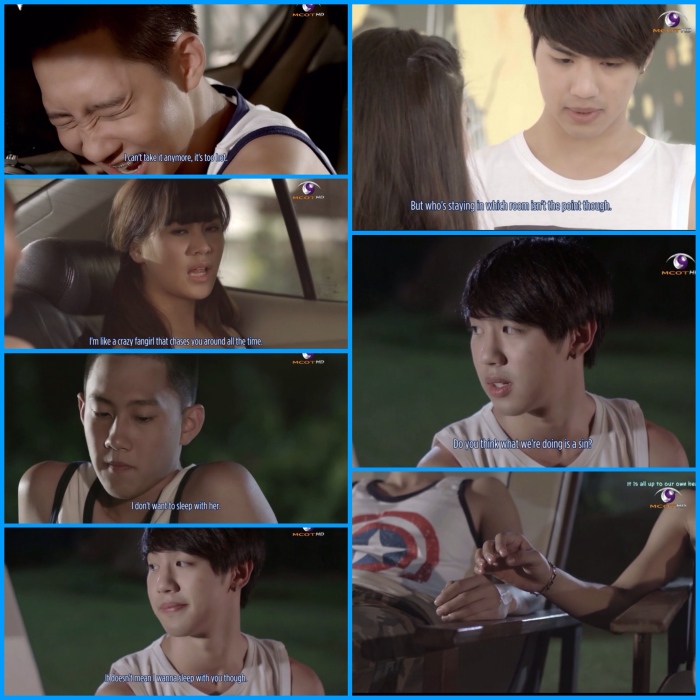 Note: I group summaries by story line, not in presentation order. If you want to know how the scenes actually played out in their official sequence, why not follow this link to Kuda’s site and watch for yourself?

Yuri, Aim, Phun and Noh skip school and check into a resort in Hua Hin. Aim decides that Noh and Yuri know each other well enough to sleep in the same room. Phun takes Aim aside to discuss the arrangements. She gives him an ultimatum that if he doesn’t share a room with her, she’ll know he’s seeing someone else. Noh tells Yuri that he doesn’t want to share a room with her for risk of her reputation. Yuri starts to cry because she thinks Noh finds her hideous. Phun and Aim rejoin the pair and outnumbered, Noh has no choice but to share a room with Yu.

Aim goes to comfort Yuri and explains that the reason Noh hasn’t made a move on her is the lack of opportunity. They conspire to have Phun take Yuri shopping to surreptitiously gather essential items to make for a romantic evening. With Phun in tow, Yuri buys candles and garlands. When she returns to their room, she asks Noh to leave while she takes a shower. After he departs for a walk, she prepares the room for a romance.

While out on his balcony waiting for Aim to finish showering, Phun spies Noh and excuses himself. He joins Phun by the beach and they talk. Noh admits that he doesn’t want to sleep with Yuri. Phun doesn’t want to sleep with Aim, but he jokes that that doesn’t mean he wants to sleep with Noh either. Noh tries to answer a question from Phun about whether what they are doing is sinful, but Phun stops him before he can answer. They fall asleep in their chairs.

Mo’s aunt pays an unexpected visit and finds a sex “how to” guide and Moan’s underwear. She reminds Mo that she has been sent to Bangkok to study. Moan arrives at his apartment, upset with his mother for using the car so he can’t travel. Mo arrives and they fight about leaving things in each other’s apartments. Mo slaps Moan, who returns the favor. She gathers her things and leaves. Mo arrives back at her place but has left her key in Moan’s apartment. She knocks on Golf’s door to spend the night. He offers to sleep on the sofa, but she won’t discomfort him. While she sleeps, Golf reaches out for her.

At Friday College, Ohm and the music club wait to receive applications for the Live Band competition. At the last moment, a dozen boys enter the room and try to sign up all at once. Ohm is frustrated that Noh isn’t there. Darling, if I knew the content of that book well enough to explain it to you, do you think I’d be blogging right now?

And finally, we’ve reached Hua Hin, which, if memory serves right, is a major turning point in the Love Sick novel. Maybe. We’ll see how it goes. Since Noh and Company will be there two more episodes, I won’t comment too much on that story line. I’ve seen the teasers, and the unsubbed Thai version, but won’t be able to comment until the cycle finishes. I will only say, so far so good. We are starting to learn more about Phun and Aim as a couple, and it looks like the production crew is finally taking the boys’ dilemma somewhat seriously. Hua Hin is Aim’s chance to finally show us who she is and what drives her, since Noh in the novel wrote her off rather quickly and never bothered to try to learn much about her.

The theme of episode 5 was “finding the right bed”, with much discussion of sleeping arrangements at a resort, and Mo finally pushing away Moan, only to find herself with no place to go but Golf’s bedroom. The boys themselves appear ready to forgo beds altogether and sleep on wooden chairs by the beach where they can be near each other, rather than in their hotel rooms apart. Oh, to be young enough again not to have to worry about waking up with back pain.

The team did a good job showing the pressure that Noh is facing from Yuri, who appears to expect sex or at least something like it as a matter of principle. She does believe that her friends who are having sex with their boyfriends are in love, and maybe they are. But she hasn’t yet noticed that two of her friends, Aim and Mo, aren’t actually all that happy with their lovers at the moment. Aim is definitely sensing the chill from Phun, and probably didn’t need to discover the missing condoms last season to notice it. Mo, of course, can’t realistically have a romantic conversation with Moan that ends with a shared future together. In the novel, Noh mentions his anxiety about the complications that result from the bedroom, and viewers should probably be aware that those complications are behind his reluctance to get involved with her as much as his interest in Phun. When he says he is concerned with protecting Yuri’s virtue, he honestly does mean that and I’m glad that the team didn’t start to hint that he’s just avoiding because he’s not interested in women.

Episode 5 was immeasurably better than the previous two episodes. No cut-aways – it’s almost as if what the leads are doing and talking about is serious enough now that someone felt that it would be cruel to make fun of their situation with a reference to Brokeback Mountain. Let’s hope we can get through the next few episodes without putting the lead couple in fancy dress surrounded by pink and blue. It’s not like the other couples get such special consideration. Just like it would be in poor taste to roll out parodies of The Burning Bed to help lighten up Mo’s story line, the couples at Hua Hin need a break from flash pop cultural references to figure out what they are going to do.

For her part, Mo has found temporary shelter with Golf, which I think is what he has been waiting for a along. We’ll see how this goes. He sincerely loves her and is devoted to picking up her pieces, but I’ve yet to be convinced that he is the right lover for her. Better than Moan, sure. But I think he’ll need to prove that he is capable of doing more than allowing her to make mistakes so that he can rescue her. My guess is that lost key means that her involvement with Moan isn’t over by a long shot.

Hua Hin continues (still without Jeed) and a maybe a chance to think about the wisdom of cats. Hopefully there will be an answer to a mystery question from episode 5. 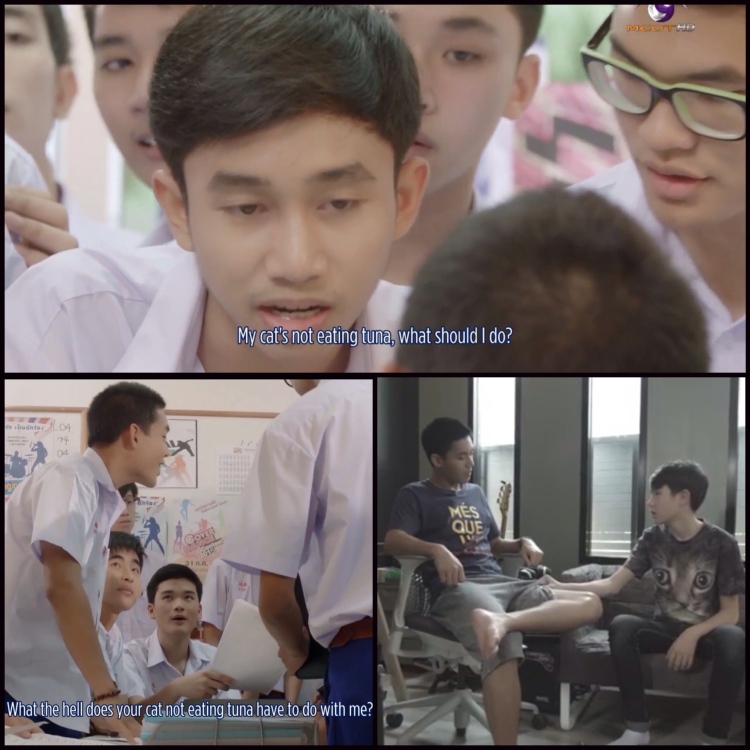 If the cat isn’t eating tuna, perhaps it would like a nibble of a different kind of meat. It appears that this cat is looking for a prawn.