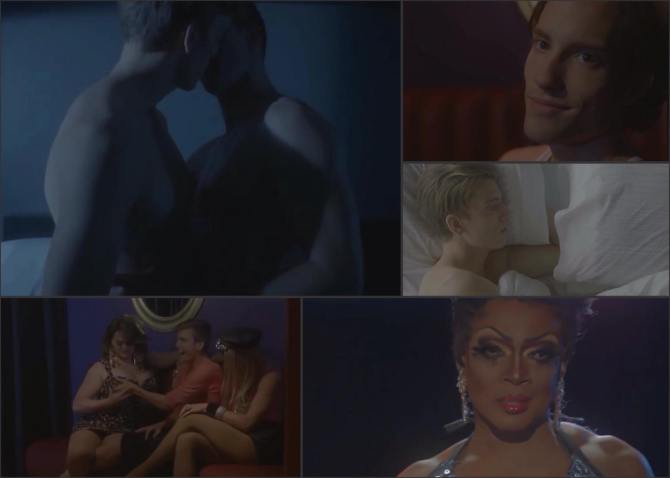 Eric Henry’s debut feature about a young men in the gay club scene is way to tepid to say anything about contemporary gay life. If one has never been to a club, I suppose one might find this interesting. But the actors fail to engage with their roles as they uncover secrets that everyone knows.

The North American gay male story used to have a very set narrative arc. Coming out, then leaving home for the big city, those wild twenties in the gay ghetto, settling down, coming home and reflecting back on life…I think that’s the story about ourselves we were supposed to be telling, and there were movies set in each stage that we could relate to, even if we didn’t actually experience them all the same way. Those “wild 20s” in the clubs weren’t for everyone, of course, and there was and is always a moral reason to personally resist them.  Institutions celebrating the hook-up culture, it is very easy to dismiss them as vulgar and hedonistic, and I’m sure there are still large swaths of gay men who in their personal ads write about being “long-term relationship oriented”, “not into hook-ups”, and “not into the club scene” as a way to distinguish themselves from those “other guys” who haunt the clubs and make finding love in the city a challenge.  I know I should miss those nights spent in clubs and bars, but I don’t…well, o.k., I do miss it just a little. (They were more than a little fun from time to time.)

I would classify Eric Henry’s Seek as a “wild twenties” film set in the backdrop of the club scene of Toronto’s Church and Wellesley village with a set of 20-something characters who work in it and write about it. Adrian Shepherd-Gawinski plays Evan, a recent graduate who has a job working for the local gay nightlife review but who aspires to land a job with a more legitimate paper, the fictitious Toronto Gazette. A features editor at the Gazette assigns him a freelance story on the topic of “What happens at night” that will appeal to his largely suburban readership’s insecurities that there are things happening while they sleep that they are no longer privy to.  After meeting a supposedly charismatic promoter named Hunter (Ryan Fisher) at a club the next night, he decides to write a 3,000 work piece on the field of party promoters and the characters who make having a good time possible.

I guess it would be helpful to point out that I think Hunter and Evan like each other and that Hunter is supposed to be charismatic and great at his job, and I’m sure he is, but the only way we can be convinced that there is something fun and exciting about Hunter is to have other characters say that about him. Most of the time, Fisher plays Hunter as the least interesting person in the room. We can’t be too sure about whether or not the leads are actually falling for each other. Not because they are playing it cool, but because they really don’t seem to look at each other in a way that makes us long for the moment when they’ll finally be together. There’s little chemistry, beyond maybe a few glances that may last a half second too long.

There are many things we aren’t really sure about the film. Like what it is actually about. What questions is it trying to answer? The plot isn’t much more than an excuse to follow a reporter around learning such revealing tidbits as the fact that clubs make money when they are filled with people who have paid for the privilege of getting inside and buy alcohol until the club closes and that filing those clubs with people can be someone’s full time job. I’m not sure I’d finish the article Evan is writing, and I was waiting for the film to actually go somewhere, but it never does.

On the personal level, Evan hooks up with a model named Jordan (gay-film staple Matthew Ludwinski) at one of Hunter’s parties and thinks he has made a connection with him, but he leaves the next day. Evan spends the movie seeing Jordan everywhere, but if the encounter and loss has meant something to Evan, it doesn’t seem to prevent him from hooking up with someone else in a bar who he’s met using a “dating” app, or in the end, from hooking up with Hunter. I’m not certain exactly what problem Evan is trying to solve, but I guess we should just take it as a given that he at the very least desires another hook-up that made him feel as good as the one-night-stand he had with a gorgeous model and leave it at that. Maybe they had a long conversation where they discussed their hopes and dreams and had a deeper connection that night that Evan could think was the start of something, but we aren’t privy to anything deeper than “I saw you looking at me earlier.”

The movie doesn’t seem want to offer any insight into “hook up culture”, except maybe that it’s difficult to make friends and lasting connections with people one has met in a club, but that isn’t exactly insightful.  While all the other characters note that Evan is shy and reserved, he doesn’t seem to have any problems to overcome except maybe a general dissatisfaction. Mr. Shepherd-Gawinski, who doesn’t seem to be have much to do except look like he’s just eaten a lemon and is trying to make the best of it throughout the film, doesn’t appear to have enough range to give us any glimpse into the character. He doesn’t appear to actually know what emotions he’s supposed to have and who he’s connecting with during his scenes. He’s a rather dry character who doesn’t know what he wants wandering through clubs that are very similar because, as Hunter notes, people don’t really want change and unknown things. It makes for a rather dull experience, to be honest, but I think the movie itself is too earnest to pull off dull and make us want more of it.

Not all films have to be about something, obviously, but it would have helped Seek immeasurably if it would have just admitted that there wasn’t a story and gone for exploitation…presented something perhaps a little seamier and steamier, or maybe tried to reveal some uncomfortable truths here and there.  But nothing sordid seems to be going on in the clubs in Toronto and we can rest assured that we’re not missing anything by staying home at night.