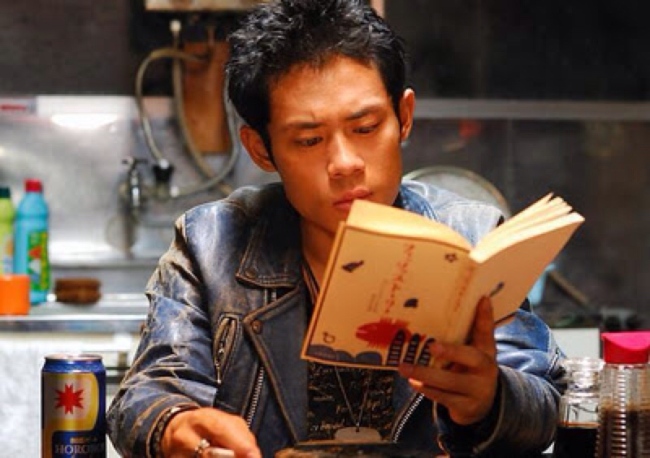 Yoshihiro Nakamura’s Fish Story appears to be most noteworthy for its non-linear narrative.  But syuzhet chutzpah aside, the story about a punk rock band saving the world comes together in the end to relay a clever story about the origins of belief, myth-making and finding religion in unexpected places.

Late in Yoshihiro Nakamura’s Fish Story, a dejected band an their manager have a final drink together in a bar in 1975. They have just finished their last recording session, a song called “Fish Story”, which band leader Shigeki (Atsushi Ito) penned in one night to express his frustrations about losing their record deal and with it, any chance that their new style of music would reach anyone in the world. The band, as the movie informs us many times, is the first punk rock band in the world, recording a year before the Sex Pistols were formed. Their recording session was a bust and the song will be released with a minute gap in it in place of a guitar solo. The band mates start speculating about that gap and how it could impact someone, and start to tell a romantic story about a future listener who uses that gap to notice a waitress and introduce himself to her. They are wrong about that as far as we know. But eventually that gap will save the world from destruction from a comet and because of that “Fish Story” as a song is probably the most important song you’ve never heard of.

Nakamura and screenwriter Tamio Hayashi based their fish story on a story collection from award winning Japanese writer Kotaro Isaka. Only one of Isaka’s works have been translated into English, so he exists as one of those writers I know about through adaptations – A Cheerful Gang Turns the Earth (2006) and Golden Slumber (2010). Without knowledge of the text, I will believe that he is the type of author who writes light novels and crime stories that aspire to be more than what they appear to be. He can be among my favorite authors whose books I’ve never read. Film buffs have a few of those anyway. In the end, it may not matter if I am right about him or not, or if he ends up not being worthy of my admiration at all, but my devotion to his works can still be meaningful. Which is the point of Fish Story, if there is any.

Fish Story tells how the song saved the world over the course of six decades, from it’s origins in post-war Japan through the pending destruction of the world in 2012. It is a narrative that skips in time. It really is five shorts in which the song has a role. Beyond sharing references to the title song, each short sequence is arranged about crises in belief in which characters must decide whether to act on what they believe or ignore those beliefs when faced with different realities. The interconnected nature of the stories isn’t revealed until the end. The movie can feel disconnected at times as new characters and settings seem to pop up for us to explore. Sometimes the decision not to tell the story straight through from beginning to end overshadows the story that is being told. However, sewn together, the parts of Fish Story make it a movie about cults, prophesy, religion and human mythmaking. Even though the pop-culture religion in question involves Power Rangers and  a punk band, the light script handles these weightier issues deftly and sincerely. It may be funny, say, that as the end of the world nears, customers in  record store wonder if Power Rangers are the solution, but the movie never veers into that territory where belief is considered to be the poor substitute for reason. It is an optimistic film about how human beings come to believe, where crazy ideas often serve characters better than reasonable ones.

The movie’s large ensemble cast is fine, although the types of acting called for in the different time periods varies. I thought the best performances were from Ito, Kengo Kora and the rest of the band, while the some characters in other sequences seemed too broad to be true. The stylistic differences between time sequences stood out enough to make the film less seamless than it could have been.

Nakamura uses scene titles to cut between stories which often give away too much information about the events of the next sequence. For instance, we probably do not need to know about a hijacking before it occurs on screen. We can figure that out for ourselves. The often repeated “fact” about the title song being the first punk rock song is repeated so often that I wondered if Nakamura thought he needed to school his audience in the history of punk. It’s possible that he needs to, but repetition doesn’t make “movie facts” more plausible. It’s as if someone doesn’t trust us to believe the fictional premise, which, as far as “movie facts” go, is more believable than a Power Rangers end of world prophesy coming true.