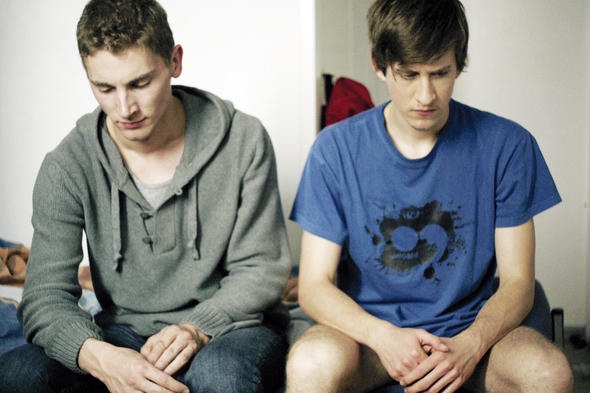 What would happen if two people started a journey of discovery and just didn’t want to ever talk to each other?  As far as “first encounter” movies go, Silent Youth is very low key, but audacious in its own way, creating awkward silences where we normally expect bonding.

I’ve had a difficult time classifying Diemo Kemmesies’ small feature, Silent Youth. Is it a comedy or a drama? I think the genre one puts it into will change with one’s age and experience with dating. It is a “bad date” movie, but it covers the type of first date that many of us have had, especially those of us who are by nature quiet and shy. It is the type of date in which it is difficult to tell if one is actually making a connection with someone, or just bored with them and going through the motions to get to the end of it.  For the young, it might offer up glimpses of a budding tender romance, but old cynic that I am, I found myself laughing. I’m very glad I did not watch this one in a theater, since a younger audience trying to watch a romance might have thought me cruel to laugh at the struggle of two men trying to connect in the film.

Silent Youth covers the first 48 hours of the first encounter between Marlo (Martin Bruchmann) and Kyrill (Josef Mattes), two college-aged men in Berlin. Kyrill is a Russian who has just returned to Berlin from Moscow. He is sporting a black eye from a mugging. Marlo is an engineering student from Lübeck, visiting a friend in the city (Linda Schüle). After wandering the streets alone one night until dawn, Marlo runs into Kyrill while waiting for a street light to change and happens to find him again on the Warsaw Bridge. They talk awhile: Kyrill asks Marlo if he’s ever had sex with a man before, and they agree to meet again later for what would be a date if either called it that. The rest of the movie follows them around on one of the most taxing but interesting bad dates I’ve ever watched.

Covering the a drawn out first encounter in a gay movie is hardly unique. Late last year, I reviewed Peyote, about two teenagers on a quest to find the drug, and White Night about a flight attendant and messenger meeting for a hook up in Korea. There’s also the inestimably great drama Weekend (2011) and the comedy Trick (1999). These movies share a focus on two men who aren’t yet in a relationship over the limited period of time from the first contact to the end of the first date and not much more after that. In first encounter films, we study a potential couple as they try to get to know one another and discover something about themselves. Silent Youth differs from these films in that neither of the two leads is very capable of having an extended conversation. There is no one leading the discussion. Think of this film as Weekend-without all the talking and no one opening up their inner lives for examination. Marlo and Kyrill aren’t discovering themselves together. Instead, I think they are finding out that dating isn’t easy.

Neither Marlo nor Kyrill seems very adept in the art of seduction and that is part of the fun of this movie. It takes the two what seems like an eternity to even smile at one another. Marlo tends to try to start conversations with morbid facts that others cannot possibly respond to. Kyrill tends to release bits of random information about himself and offers up questions that would appear to be conversation openers if he would ever respond to follow up questions. The date could just be a hookup. Although both men talk about how they could go to the beach together at some point, we’re never quite sure that Kyrill believes he is on a date. At times Kyrill doesn’t care whether Marlo has a good time with him or not. He may be shy, lonely or just weird or maybe all three. Marlo thinks about leaving, but then decides to try to make the dreadful experience work out, perhaps because it is his first date with a man and he wants to find out if Kyrill is actually boyfriend material.

Silent Youth is not for those who want to watch romance bloom quickly and clearly. At times it barely seems to move along at all. Bruchmann and Mattes need to carry the film as there is only one other speaking role of note. Both do a fine job making us question whether they have made a connection. For once, I can write that a lack of chemistry between the two leads makes the film a success.  I found the movie brought back a lot more memories of dating life than most other films. Most dates don’t actually lead to great discoveries about oneself, and I thought it was very bold of Kemmesies to film those moments when it would have been easier to just pander to our desire to see romantic endings to every first date on film.