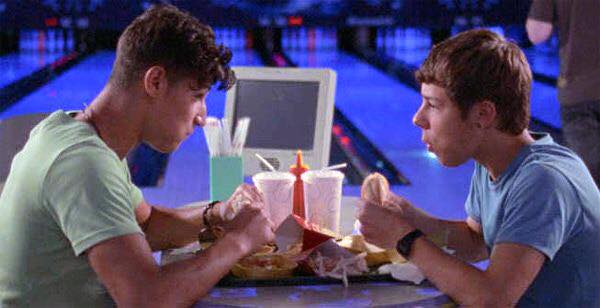 Mikel Rueda’s little gem about two young men attempting to act on their affection for each while one is under threat of deportation is a sympathetic portrait of how quickly love can take hold of us. While I’m not a big fan of the non-linear story development, the chemistry between  leads Germán Alcarazu and Adil Koukouh,makes this more enjoyable to watch than your standard lonely boys in love story.

Maybe because I accidentally watched too many “being gay and adolescent is so depressing” movies recently, I was delighted to come across a feature film with two male leads trying to fall in love who seemed to be attempting to enjoy being with each other rather than retreating to their rooms, or fantasy worlds to escape from where their desires were taking them. I was skeptical at first of Mikel Rueda’s Hidden Away, since when the film opens we are presented with another silent lead, a Moroccan boy named Ibra (Adil Koukouh) on the run from something unspecific. I’ve watched enough silent leads lately to wonder if anything ever went well for them and worried that watching would be another drawn out process of trying to figure out what was bothering another angsty teen. I needn’t have worried, since Ibra is paired with a Spanish boy named Rafa (Germán Alcarazu), a bit more buoyant and chatty, and it was a pleasure to watch them try to get together.

Hidden Away is set in Bilbao, Spain, Basque country. It follows the lives of Rafa and Ibra for about three or four weeks before and after they meet, try to go on date, and try to develop their friendship into something a little more while Ibra avoids deportation. We open near the end of the second act, when Ibra is trying to leave Bilbao. Then jump to the middle of the first act when the boys first meet in a night club bathroom where Rafa has gone to escape from the pressure his friends are placing on him to kiss a girl named Marta (Garazi Navarro). Then we skip forward in time to another scene. The first two-thirds of the movie plays around with narrative back-and-forths, as it flows through the life of Ibra in a detention center for youths seeking asylum in Spain and then out on the streets where he is picked up and coached by a Fagin-like character named Youseff (Moussa Echarif). Meanwhile, Rafa deals with his 14 and 15-year-old friends who are trying to push him to start dating and closing in on the reasons why he isn’t interested in any of the perfectly fine girls they imagine having sex with. It isn’t until late the final act of the film, after the boys have gone on what would be a first date if anyone could be open about their motives that Rueda finally settles in on a linear chronology.

Hidden Away’s disrupted narrative is a hard to follow at first, and I am still not certain if I have all of the details straight. I am not certain why that format was selected, although it is tolerable since in general, both boys’ stories are rather simple to figure out. That format works best when the stories are relatively tight and thankfully Rueda doesn’t present a lot of surface details that won’t factor in to the later part of the film. Rafa’s problem is that he has friends who are in his personal business too much; Ibra’s problem is that he lacks friends and his immigration status makes having them difficult, since anyone inside the detention center might be taken away and outside, since certain people are show hostility to Moroccan immigrants, it is best to keep one’s distance from everyone. Those are problems that are understandable enough that we can make it through any number of flashbacks and forwards to flesh out. If it adds anything to the film, the narrative order makes it difficult to follow the boys as they come together, as we don’t know exactly where we are in time at any given moment, and that serves to put us in the shoes of the confused pair who are trying to find something to hold onto in circumstances that are also very chaotic.

For all of the melodramatic potential present in the story, Hidden Away remains largely free of over-dramatic moments. It may not be the film for those looking for a straight up boy-meets-boy love story without complications; the boys never actually rest enough to share big moments together. But despite it’s art house narrative stylings, the film remains warm enough that we can be drawn into its tale and feel for the boys in a star-crossed lover situation without becoming depressed or overwhelmed by feelings that they are victims of a situation that will never change, or that we ourselves victims of an overzealous director who wants the audience to walk away from the film feeling hopeless.

Alcarazu and Koukouh carry their weight admirably, although they look somewhat older than their screen ages of 14 and 15. There isn’t much to their back story, but that seems to be intentional, especially in the case of Ibra, who simply would rather not have Rafa feel sorry for him by telling him how he lost his family and ended up in Spain. The supporting roles are well cast, but relatively bland – Ramón Agirre as Rafa’s demanding and xenophobic father, Eder Pastor as Rafa’s equally xenophobic and bullying friend along with the police serve as the primary antagonists for the pair, although neither has enough screen time to offer much more to their roles than wearing their disdain for Moroccans on their sleeves. Ana Wagener is fine as the dedicated lawyer or social worker who is trying to navigate Ibra though the asylum process who represents the section of citizenry that is trying to do the right thing and care for the underage wards of the state. The roles are all necessary for the story, but none offer any surprises. It’s Rafa and Ibra who are at the center of the story, and the performances of the leads are enough to make the film worth watching.